Despite the name, French drains didn’t actually come from France (unlike great inventions like the parachute, food processor, stethoscope, and aspirin). Instead, it was a creation of Henry Flagg French, who was an assistant US Treasury Secretary. Back in 1859, he released a document called Farm Drainage, and homeowners across the world have relied on French drains ever since.

As well as ‘French drain’, this design has several other names:

For those who are still confused, the design revolves around a trench to collect all underground moisture. When landscaping, lots of homeowners and builders consider irrigation but don’t pay as much attention to drainage systems. Unfortunately, for locations where rainy seasons are common, this has the potential to cause all sorts of headaches.

When water is allowed to build, it damages the structure of the building, causes diseases in plants, and damages lawn mowing equipment. In many cases, it’s possible to eliminate the risk of these problems with a simple French drain. The size of your French drain depends on how much water needs to be carried, the land grade, and more.

Why Are French Drains Important?

Why would you want a French drain on your property? Primarily, the land needs a French drain because it relieves water tension around the home. Without a French drain, water has free rein to collect against the walls of the property, and this can seep through to cellars while also damaging the structural integrity of the whole building. Inside the home, you suffer from damp and mould. Outside, the mortar joints crumble while the brickwork starts to decay. The older the property, the more likely the damage is to cause major issues.

When installed correctly, French drains keep water away from the building and carry it to other areas. However, its job doesn’t end there because modern designs also contain this water. Rather than having to deposit it somewhere, the drain contains the water and it gradually absorbs into a location of your choosing. Wherever it reabsorbs back into the landscape, the idea is that it’s kept away from walking areas and important structures.

When installing a French drain, planning is perhaps the most important stage of all. As discussed, it’s important to find a location where the water can sit away from structures and other critical areas. Furthermore, the trench itself needs a strong path without contacting pipes, cables, trees, and other obstructions. Although it sounds simple, most builders will plan a route with tape, string, rope, or even marker spray.

During the planning phase, don’t forget the additional soil you’ll have after digging. What will you do with the waste soil? While some people use it for a feature in the garden, others simply dispose of it or gift it to friends and family. As professionals will tell you, the trench should never go deeper than the home itself. When planning the trench route, keep in mind that a standard width for a French drain is between 20cm and 30cm.

While reading about French drains, we know that some people will be thinking about money. Is a French drain expensive? Ultimately, there’s no universal answer because it all depends on the required size, materials, and whether or not you choose a professional for the job (or perform the work yourself).

Generally speaking, you’ll pay between $20 and $30 per linear metre. In total, this means between $1,000 and $1,500. Speak to a professional service for a tailored quote! Contact Bill’s Custom Concrete & Yard Drainage for more details. 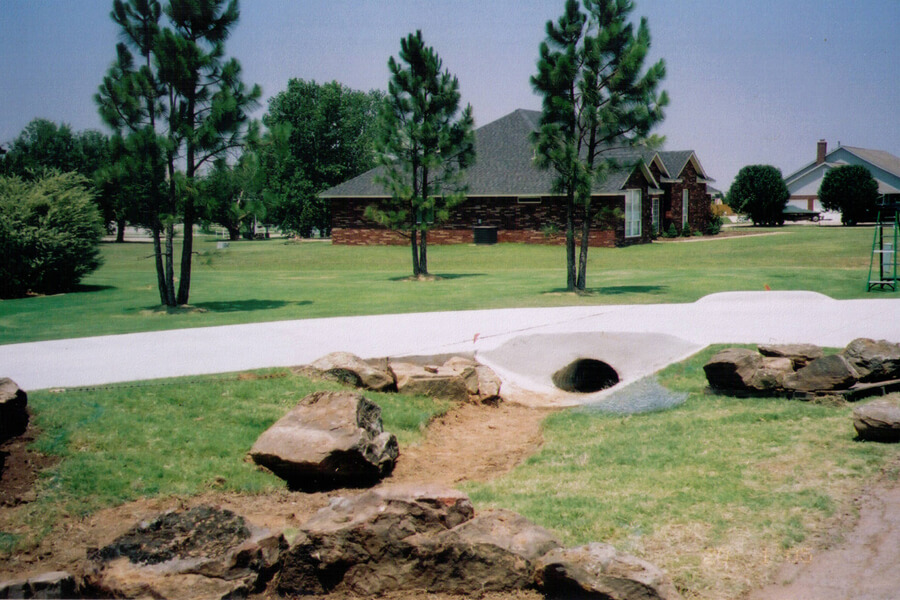